AJAX is a family of Armoured Fighting Vehicles being developed by General Dynamics for the British Army. Here, defence writers Paul Elliott and Julie Shennan examine its implications for the soldier in the field and the UK supply chain.

AJAX will form a central component of the UK’s new Strike Brigades, which were announced in last autumn’s Strategic Defence and Spending Review (SDSR). 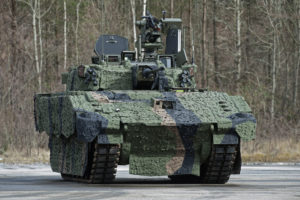 Finally, the Engineering variants based on the PMRS comprise 38 Recovery vehicles (Atlas) and 50 Repair vehicles (Apollo).

The range of AJAX variants will allow the British Army to conduct sustained, expeditionary, full-spectrum and network-enabled operations with a reduced logistics footprint. It can operate in combined-arms and multinational situations across a wide range of future operating environments.

The first British Army squadron will be equipped by mid-2019 to allow conversion to begin with a brigade ready to deploy from the end of 2020.

From its initial award, General Dynamics has sub-contracted out several parts of the AJAX programme production, including (but not limited to): 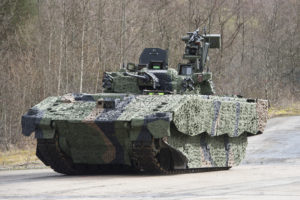 In December 2012, the programme passed its first major design point, the Preliminary Design Review (PDR), which reviewed initial design of the AJAX fleet along with its risks and mitigations.

The Mobile Test Rig (MTR) – the precursor to a prototype Specialist Vehicle – has undergone Cold Weather, Operational and Tactical (O&T) and Mobility trials, as well as Accelerated Life Testing (ALT). It has been providing significant chassis and driveline de-risking since June 2012.

A preview of the first pre-production prototype, a PMRS variant, was unveiled at DVD2014.

In September 2015, the first turreted AJAX prototype was unveiled at the DSEI expo at ExCeL in London.

I am pleased to see first-hand today the significant, continued progress at the Merthyr Tydfil site. The AJAX programme demonstrates how the Ministry of Defence is working in partnership with industry to deliver state-of-the-art capabilities to the British Army and this facility highlights our commitment to that.”