Today will see the UK’s first Remembrance Art Trail open at Canary Wharf. Designed in association with the Royal British Legion, the trail has been created by multi-disciplinary and international award-winning philanthropic artist Mark Humphrey with the assistance of trainees from 1 Royal School of Military Engineering Regiment (RSME), based in Chatham, Kent.

The Trail sees seven stunning art installations located around Canary Wharf, each with a different focus, encouraging reflection and contemplation. Commissioned by Canary Wharf Group, in association with The Royal British Legion, the pieces have been installed by former members of the Armed Forces and soldiers 36 Training Squadron RMSE which provides artisan engineer training to the Corps of the Royal Engineers. 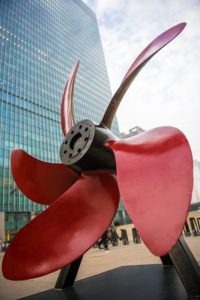 Together the seven pieces tell an extraordinary visual story about the nature of sacrifice and service by our Armed Forces.

The pieces are the culmination of a years’ work by artist Mark Humphrey, who has created several large scale artworks in the past for the Armed Forces and military charities, including the marble war memorial poppy, titled ‘Forever’, at Royal Wootton Bassett, plus the First World War Centenary art statue obelisk, ‘Every Man Remembered’, commissioned by The Royal British Legion.

Speaking about his work, artist Mark Humphrey said: “My idea for the Remembrance Trail attempts to engage the public during poppy appeal, by capturing the emotion of the armed forces. Using military engineering, materials and equipment, the artworks are designed for reflection, awareness and fund raising, paying respect to our servicemen and women.”

Lt Col Sean Cunniff, Commanding Officer 1 RSME Regiment said: “The Corps of Royal Engineers have been delighted to be involved in the construction of exhibits as part of the Canary Wharf Remembrance Art Trail.  The construction has taken place over a period of six weeks at the RSME, Chatham, with final installation at Canary Wharf over the weekend involving a team of approximately 40 personnel.

“The art trail offers an occasion for the public to reflect on current serving and fallen servicemen and women but is an excellent opportunity for the Royal Engineers to showcase their artisan skills to the Public during the year of ‘Sapper 300’, the commemoration of our tercentenary.”

Major Andy Cooney, Officer Commanding 36 Training Squadron and project leader said: “This has been a fantastic project as it has made the trainees think outside the box and design intricate shapes of different sizes using different materials. If you were to put it into a tactical context working in austere locations as the British Army is doing around the world, the skills used here have been a really good experience and one that will set them up for their future careers in the Field Army. 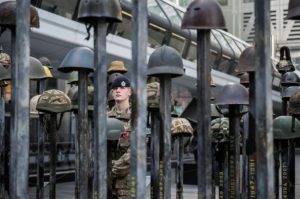 “The art works are also an opportunity to gather around and reflect and think about the sacrifices that some of the soldiers have made whether it be the tragic loss of life or the serious life changing injuries they have been left with. It is really good to have a focal point where you can stop and pay your respect to fallen colleagues.”

After the trail closes, some of the pieces will be loaned to supporting charities in order to help continue raise awareness and donations. These include, RAF Benevolent Fund, Royal Navy and Royal Marines Charity, ABF The Soldiers’ Charity, Not Forgotten Association, Britain’s Bravest Manufacturer’s Company, The Poppy Factory Richmond, Stoll and Combat Stress.