An interview with Angela Owen, PA Consulting and founder of Women in Defence

Following on from the successful Women in Defence Awards held in October, Defence Online spoke with founder of the networking group, Angela Owen. We discussed the success of the awards, inclusivity in the defence arena, and their changing roles from mainly office work to bearing arms. 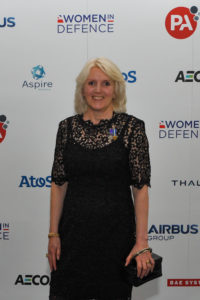 Angela joined the British Army as an officer in 1976 on a Short Service Commission, leaving to start a family in 1984 and re-joining in 1992 when the rules changed to allow mothers to serve.

An accountant by profession, her passion is in Diversity and Inclusion and people transformation. In 2008 Angela joined PA Consulting Group as a defence and transformation consultant and has recently completed a strategic business partner contract within the DIO, where she was Head of DIO people team.

How are you Angela? I’m sure you are excited after the inaugural awards and very proud of such a big achievement, did you ever think you’d get this far with Women in Defence?

Yes the awards were great. I never thought we would achieve so much. I set up Women in Defence in 2011, really because I used to go to seminars and conferences and there would be 100 men in the room and maybe half a dozen women. It was just wonderful to meet and talk with women in similar jobs, and we decided to set up a networking group and it has grown and grown from there.

In what is obviously seen as a male dominated arena – How can we tackle bringing more women into the defence sector?

There is a real emotion in the room at the moment to try and improve and increase the number of women in the defence arena, whether it be Army, Royal Navy, Royal Air Force, MOD civil service, or defence industry. I think that that came over at the awards ceremony. People really do want to recruit more women into the sector and everyone is looking at how that can be achieved, whether through advertising, how they are recruiting, reaching out to schools to encourage girls to keep up those STEM subjects, which are so crucial, post A-level and on to degree level. And this is all fantastic to see.

Do you think defence will achieve the ambition of more women in the sector? What challenges are there to this all inclusivity?

Everything will take time, it is not something that is going to change over night. Although we have come a very long way.

When I was commissioned into the army – almost 40 years ago now- the training we did was very, very different from that taken on now. We were taught army organisational structure, how to salute etc, but we were also expected to learn job specifics, such as bookkeeping – as we would surely be doing accounts at some point. We were shown weapons but not taught how to fire them as women didn’t bear arms at that stage. The training then encompassed the jobs we were expected to take, whereas now, it is identical to the men, which is the way it must be.

Can you tell me a little more about the awards, how did they come about?

The awards came after a number of us joined up for lunch at the Business Woman of the Year. We decided that they should do something similar for women in defence.

The timing was very serendipitous, we started planning for the awards in March/April- went live mid-June, accepting nominations through July. We thought, if we were very lucky we would get about 70 nominations – we actually received way over 200 nominations, which blew us away and showed us that the timing was right and there was a real appetite to celebrate women’s (and men’s) achievements in defence.

The Awards themselves were attended by Sir Stuart Peach, the Chief of the Defence Staff. His speech discussed how important diversity is to defence – it is not a new addition, but vital ground. .

We also had Lieutenant General Richard Nugee CBE, Chief of Defence People, presenting the awards, with sponsorship from Airbus, Aecom, BAE Systems, Thales, Aspire Defence, HPE, ATOS and PA Consulting Group, and an awful lot of people in the room, which all helped to create an incredible energy and desire to go away and continue to make things better.

Following that, I’m pretty sure will be doing the awards again next year.

Can you tell me a little more about the nominees and winners?

The calibre of the nominees was incredibly high – we had five categories, with one – promotion of gender diversity – open to men as well as women.

What pleased me most was not only the high quality of the nominations, but also the spread of nominations as well – nominees came from across the armed forces, mod civil service, defence industry, and the third sector – they all took it to their hearts. And it wasn’t just senior people – if you look at the armed forces spread, 50% were officers, and 50% other ranks –this is fantastic and just what we wanted.

So I was really very pleased and when I sat down and read all the nominations – I was incredibly proud of every single one of them. Some were incredibly courageous and they have achieved a huge amount but the thing that rang through to me, was that they were all determined to make a difference in their own way.

The post Women in Defence appeared first on Defence Online.

Scheduled Maintenance We are making some improvements to your service, which will require essential planned maintenance and downtime during the weekend of Saturday 25th and Sunday 26th January 2020. Your service will be offline during the period below:
Planned Start: Saturday 25th January, 09:00 BST | Planned End: Sunday 26th January, 18:00 BST
The downtime will enable a significant upgrade to your service, paving the way for higher performance levels and new features and functionality.

We will be working to ensure that the downtime experienced will be minimal and apologise for any inconvenience which this may cause.