GeoCoding is the process of taking non-coordinate based geographical identifiers, such as street addresses, and finding associated geographical co-ordinates. This process is helpful not just to the military, but to those working in related sectors such as security, humanitarian aid and the emergency services. Here, Giles Rhys Jones, CMO of what3words, talks to MOD DCB features editor Julie Shennan about the use of GeoCoding in stabilising critical environments.

Around 75% of the world’s countries, some 135 or so, do not enjoy adequate addressing. This means billions of people are unable to receive guaranteed aid should they need it, posing a huge problem for the emergency services, security professionals and humanitarian aid workers.

what3words is a disruptive SME attempting to solve this problem, with a word combination GeoCoding system. The system addresses every three metre by three metre space on the planet with a combination of three different words. It includes 40,000 words in 57 trillion different combinations and is available in over ten languages.

Giles Rhys Jones, CMO of what3words, explained: “what3words is the user-friendly application of satellite co-ordinates that uses words and not numbers. Everyone in the ecosystem needs a basic understanding of how it works. However, the system can work offline, using co-ordinates to convert an algorithm to a three-word address.”

He added: “People are not predisposed to remember 18 digits of co-ordinates, so with latitude and longitude mistakes creep in, and these mistakes are not immediately obvious.”

When faced with an 18-digit code it would be easy for a first responder to confuse a couple of digits, and – were this error not immediately realised – it could send the rescue team in the wrong direction, delaying the rescue mission and further endangering the victim.

what3words attempts to solve this problem by moving words which sound similar into GeoCoding combinations that are spatially far apart, so that any mistakes that occur would be immediately flagged up.

Mr Jones expanded: “For instance, the reference area of ‘table-chair-lamp’ is in Australia while ‘table-chair-damp’ is in America; so anyone who misheard this reference will realise their error straight away.” 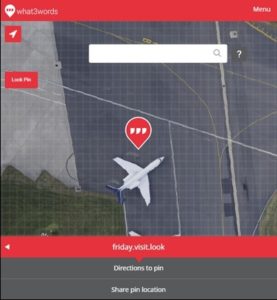 This word-combination approach to satellite navigation makes it easy for information to be conveyed across radios.

Mr Jones said: “Security-wise, what3words was used by first responders and fire departments at Super Bowl 2016. The stewards found that shouting three words down a radio was much less prone to error than co-ordinates.”

Other situations in which what3words’ GeoCoding technology has been used include ski rescue services in Lake Tahoe in the US, security at the recent World Humanitarian Summit in Istanbul, and first-aid services at Glastonbury music festival.

Mr Jones commented: “what3words was used by Festival Medical Services, the company who provide the first aid on the site of Glastonbury. Glastonbury’s first-aid workers usually have 30-40 ‘could not finds’ in the course of any festival and what3words managed to reduce this to single figures.”

what3words’ work at Glastonbury shows how GeoCoding can be vital in addressing a large self-contained event; another example of this came at Farnborough International Airshow 2016.

Mr Jones said: “what3words was used by the event organisers at Farnborough International Airshow to help plan security around the airshow. The system worked from a satellite image of the site shot the day before the event started, before dropping its grid system underneath it and using the co-ordinates to liaise with FIA’s security team to get to specific locations quickly.”

A similar approach will be taken to GeoCoding at this month’s Rio Olympics.

Mr Jones noted: “what3words has just been built into Digital Globe’s security package for the Rio Olympics 2016. So they have a security package that integrates high-resolution satellite imagery, 3D modelling and then information on traffic and people movement that allows people to click the map and access a three-word address. During the Olympics this will help with tasks like planning a helicopter landing zone, specifying safe points or first responders.”

While GeoCoding can help resolve security issues, it is also a technology that can be applied to solve humanitarian problems. It was in this context that what3words first got into business with the United Nations.

Mr Jones explained: “The UN has built what3words into its crowd-sourced disaster-reporting app; people can send photos or texts of disaster zones and use geotagging to identify their location.

“This led to discussions of how to use geotagging to help address crises that prevent aid being effectively distributed. This conversation got what3words onto the radar of security, defence, aid and humanitarian aid professionals.

“People in the defence and security industry then started seeing our solutions and considering how they could help meet their requirements.”

This joined-up thinking demonstrates the way in which many firms are using transferrable technology to enter the defence marketplace. Mr Jones explained that it just takes a bit of perseverance.

He concluded: “what3words is a disruptive and innovative business, so we have had to break through the old habits of GPS co-ordinate use to get people to adopt our new technology.”