Satellite technology can be harnessed and utilised by almost every industry in some form. Satellites have the power to improve telecommunications, detect illegal activity and even help the environment. MOD DCB features writer Domhnall Macinnes caught up with Stuart Martin, CEO of the Satellite Applications Catapult, to discuss today’s satellite technology and how companies can boost their capabilities with it.

Stuart Martin, CEO of the Satellite Applications Catapult (SAC), was involved in the establishment of the Catapult in its early stages, ensuring it had a plan in place to attract government investment to get the programme under way. Mr Martin was also tasked with attracting private sector investment, justifying government investment and building the team around the organisation’s activities.

The Catapult currently has around 100 staff, with facilities based in Harwell, Oxfordshire and network centres around the country. It is part of a strategic space vision, established between industry, government and academia over the last ten years, that is looking at the space sector and the economic opportunities it presents between now and 2030. The vision is to create a £40 billion sector, taking advantage of the expertise available in space technologies.

Mr Martin commented: “When you look at the trajectory of space and the opportunities it presents, what becomes clear is that the major beneficiaries from using space technologies are going to be non-space companies.

“Of course, we’ve got lots of expertise in building satellites and launching these assets into space; but actually how we utilise these assets and how we deliver new services and new products over the next 15-20 years, that’s going to deliver the real economic benefit to companies as well as everybody down here on earth. This is the opportunity that the Satellite Applications Catapult has been set up to try and take advantage of.”

Indeed, satellite technology has the capability to impact a great many industries; the scope is in fact so wide it would be challenging to find an industry sector it won’t impact. Its range extends from the retail sector to oil and gas, right through to healthcare. For example, in oil and gas exploration, satellite images can be taken of remote areas of the world, offering a more cost-effective and safer method of fuel exploration. In retail, utilising satellite technology in communications allows retail transactions to be carried out no matter the location.

The Catapult seeks to engage with all these communities, getting them looking towards space and thinking about how they can use space technologies to either help solve the problems confronting them or create a competitive advantage within their own markets.

The Catapult’s flagship project is the work it has been doing with Pew Charitable Trust and satellite data services company exactEarth Europe to combat illegal fishing. One of the real remaining areas of organised crime is out on the deep ocean where the surveillance and security benefits of CCTV coverage and other communication networks are obviously not available. It’s estimated that one-fifth of all the fish caught today is caught illegally. The global economic cost of this is about $20 billion, but more importantly it means that large parts of the ocean are potentially being fished to extinction.

Mr Martin noted: “There are large parts of the world where about a billion people depend on fish as their primary food source, and there is real concern that if something isn’t done about illegal fishing then these populations are going to run out of food.

“What we’ve been doing is looking at using satellites that can pick up the communications between ships and then using that to draw up a picture of what’s happening on the oceans and what the different vessels are doing. We can combine that data with information that we have from other databases around fishing and use it to help the various enforcement agencies catch and prosecute those fishing illegally.

“Also, it means that the food supply chains can use the data that we’re providing to get confidence that the people they’re buying their fish from are behaving ethically and fishing in the right places, and in compliance with their licences.” 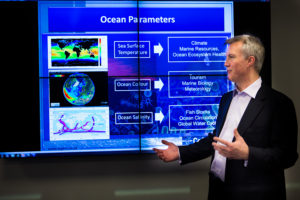 The Catapult also has an upcoming piece of work on environmental monitoring and assessment, looking at how, for example, an organisation in the mining industry can regain confidence from a society that has become suspicious of the industry and its ability to protect the environment while they carry out their operations.

Mr Martin explained: “The mining industry is looking for new ways to demonstrate that they are going to be able to manage new operations responsibly and be transparent about it – sharing information about what the impact will be of the work that they’re doing and being able to respond to environmental challenges during the lifetime of a new mine.

“Satellites are going to play a big part of that for an industry that is worth billions yet is being slowed down because of this inability to demonstrate transparency and ethical practice. Using satellites has the ability to unblock a lot of currently stalled activity.

“That’s an area that is potentially huge when it comes to looking at how we achieve some of the UN’s Sustainable Development Goals.”

Recently the Catapult expanded its Scottish Centre of Excellence into the Highlands and Islands. Furthermore, it has built on its portfolio of UK operations with the establishment of Centres of Excellence in the South Coast and South West of England.

The South West centre is based at Goonhilly Earth Station in Cornwall and its lead partner is the University of Exeter. Although the centre is looking at some of the issues in the maritime sector similar to illegal fishing, it is also looking at projects such as remote autonomous vehicles in the maritime environment.

Mr Martin said: “It’s about using satellites to monitor robotic vehicles going out onto the deep ocean that might not come back in to land for months on end. It’s about being in control of this technology and being able to receive data while they’re out there and furthermore understanding where they are and what they’re looking at, while utilising that data.”

Concluding, Mr Martin provided an insight into how businesses can leverage the capabilities of satellite technology to propel themselves ahead of the competition.

He advised: “We actually have a team of professionals whose entire role is to help businesses with a variety of things including getting access to finance, working out what grants are available, making supply chain links and getting legal advice.

“We also try to involve companies in projects as much as possible. If there is technology that exists which cracks the problems we’re trying to solve then we absolutely try to plug those companies in. We have an opportunities page on our website so there’s always something going up there about new projects or bids that we’re working on or expertise that we’re looking for. There’s always a chance to come in and put your company forward.

“Furthermore, we run lots of networking events, linking companies up with each other. We have 67 companies based here at Harwell and even more across our broader network. If you come to these events either here or elsewhere in the country you will get your foot in the door and hear about what other companies are doing, generating opportunities that way.”

He concluded: “Our main event is a very social one called Satuccino which we run once a month at our base in Harwell. Companies have the chance to present a one-minute pitch about what they’re doing, what kinds of partnerships they’re looking to establish and what sorts of capabilities they’re looking for. If you’re new to the environment, coming and doing a one-minute pitch will link you to 30 or 40 companies in attendance at the event and expose you to the community. Then by coming regularly you just get more and more.”